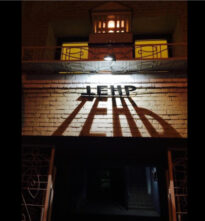 The painter is creating a grate variety of pictures at the screen using different technic of shadow theatre and different and unordinary technic of grafic design. The theatre «Tenj» («Shadow») is a small Moscow theater created by a married couple, Maya Krasnopolskaya and Ilya Epelbaum. The theater was founded in 1988 and since then, Maya and Ilia have had time to try a variety of formats for their performances. It all started with shadow ideas, each time a new way was invented to surprise the audience. Now in the theater mostly there are puppet shows. In the small hall (probably the “smallest” hall in Moscow, it is designed for 5 spectators), there are tours of the “Grand Royal Lilican Theater”, on the big stage “Puppet Cafe” prepares for the opening, and the culture is delivered to the house by the “First Ace Theater”. Theatre «Tenj»- 9-fold winner of the award “Golden Mask”. Multiple participant and laureate of the festivals Big Change, Harlequin, Cucart and others, a constant participant of numerous festivals abroad (Spain, France, Germany, Brazil, the USA and other countries).