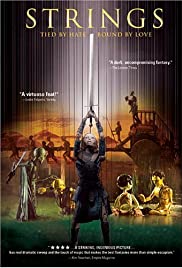 A Prince leaves his city and sets off to avenge his father, not aware his father wasn't murdered, and in reality, committed suicide, and soon learns the truth about his people from a warrior woman. Strings" is quite a unique and interesting movie going experience. This just happens to be one of those movies I had never heard of before that I ran across doing research, and decided to give it a shot. My biggest problem with Strings is that the puppets do not move their mouths, which made it a little hard to follow as the dialogue as it switched back and forth between characters. Once your able to get past that - this is really a beautiful little film. A little over-dramatic but with some pretty high production values, "Strings" is unlike no movie you have seen before. The cinematography, voice overs, and set designs are well done and very pleasing to watch and to listen to all throughout. One thing I enjoyed about "Strings" was the how the actual strings were incorporated in the movie. There is no effort to hide them. In fact, the strings themselves are part of each characters actual being, reaching all the way up in to the sky with the "head" string being the strongest and most valuable. Cut the head string, and your dead! Get a little to playful, and you might get tangled and need some help getting undone! Interesting little concept. (Boggman)